This is a reasonably lengthy process because there's a fair few things attached to the subframe, so there are a lot of photos. I know you like photos ;-)  The engine itself is mounted to the frame with four aluminium mounts. These protrude out from the side of the engine and sit on top of rubber / metal engine mounts so it isn't rigidly fixed and can move around a little. There's a central bolt through each mount to hold it to the frame. The first thing I did was to visit all four bolts with penetrating fluid: 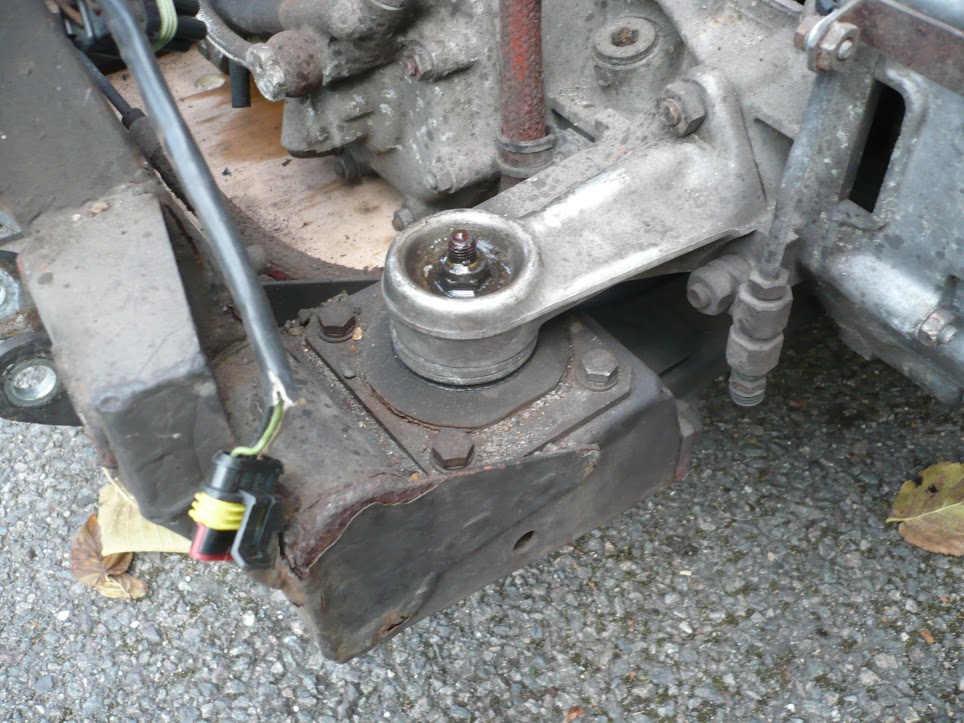 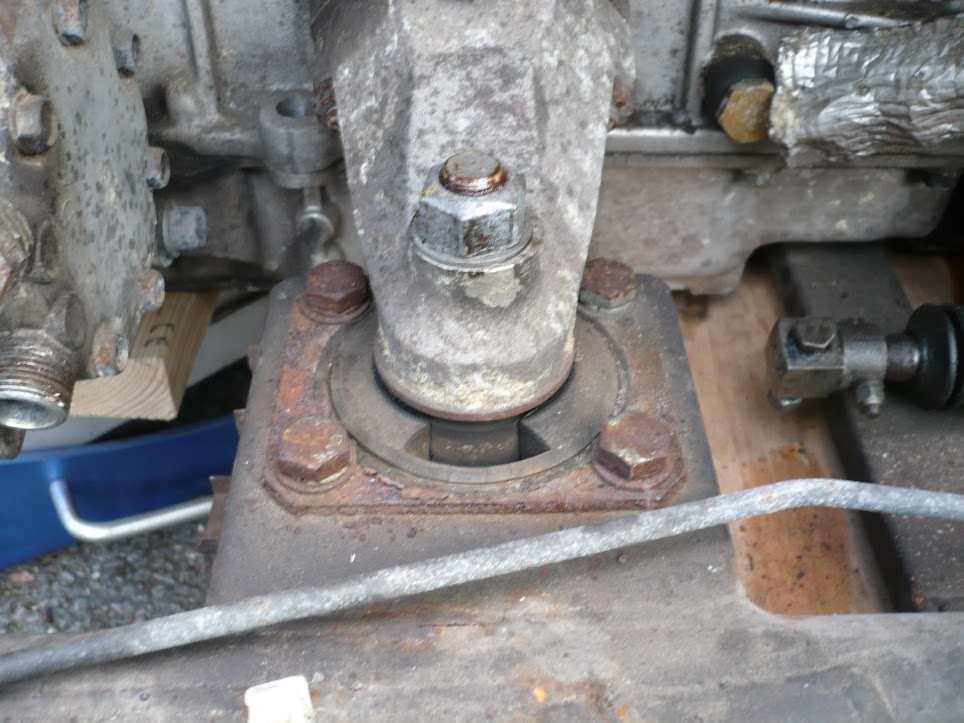 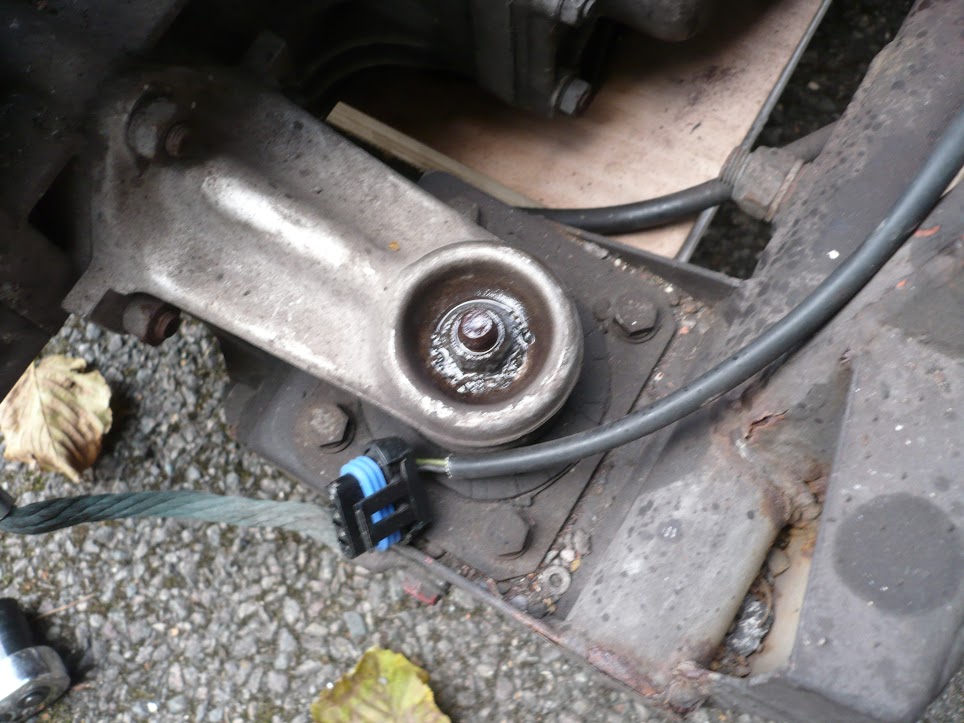 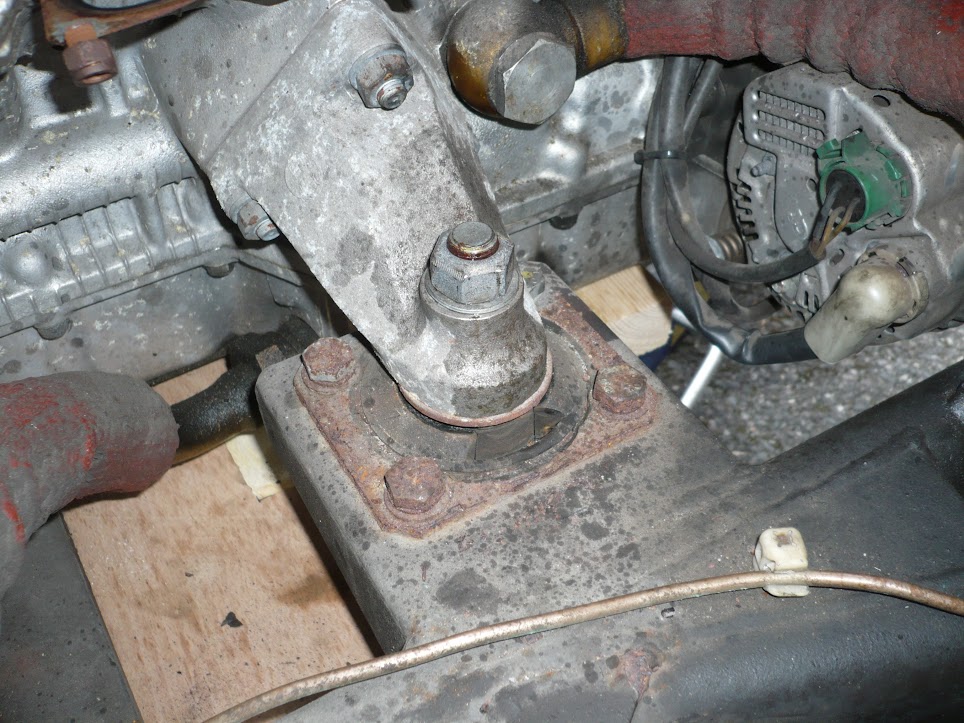 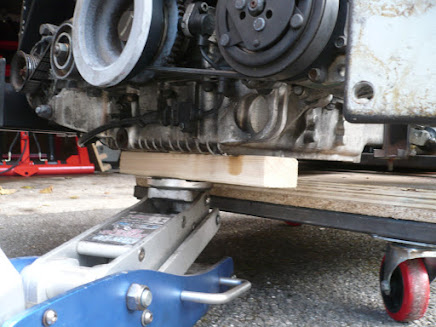 The central crossmember is held on with two allen head bolts at each side. As you can see, with the engine sitting on the dolly it can't be removed. 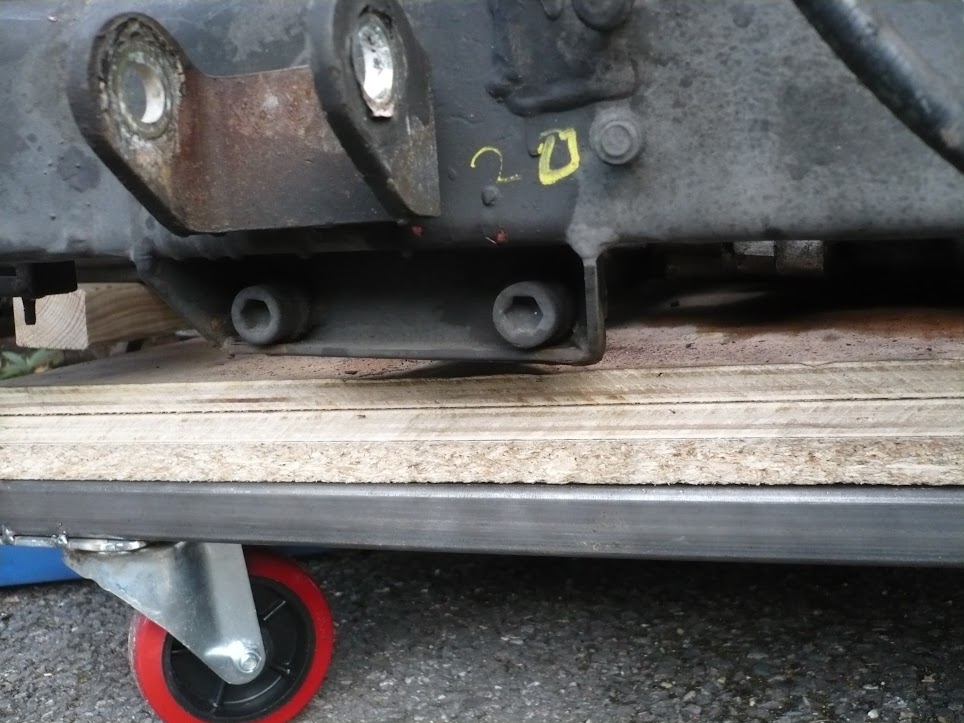 The rear crossmember comes out OK as it hangs off the back of the dolly: 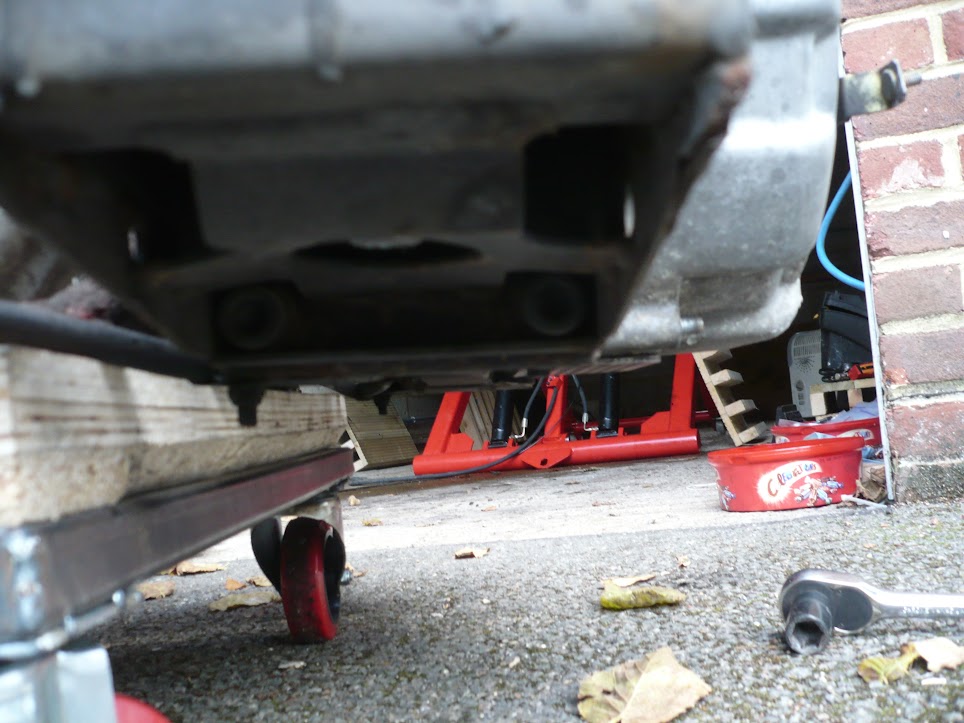 Rear crossmember removed. It seems I forgot to take a photo of the other one: 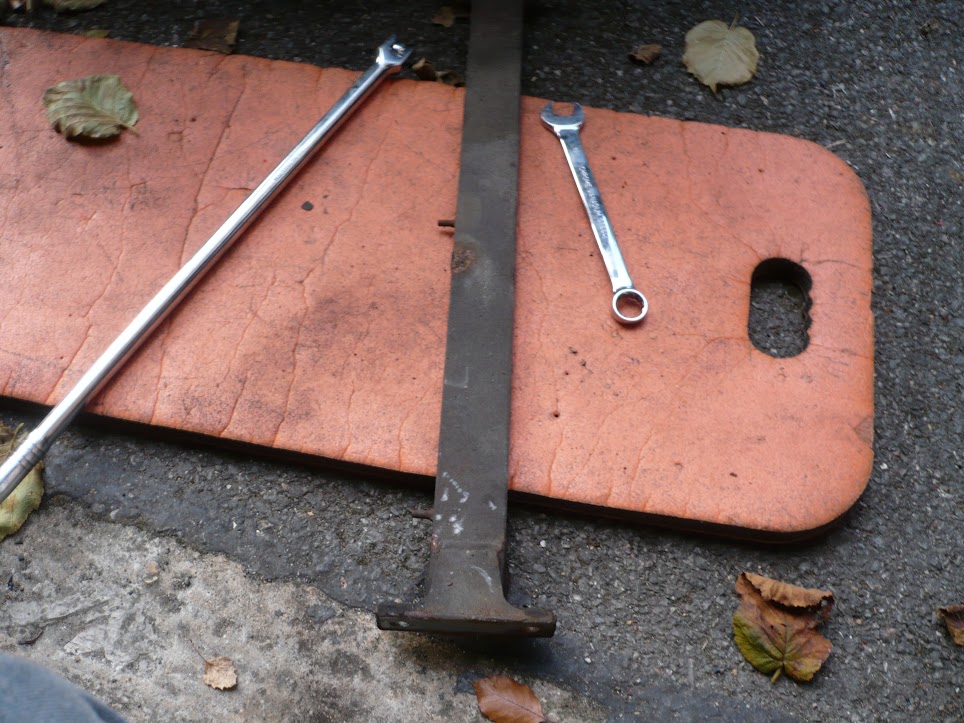 The coil packs are fastened the the engine subframe so these need to be removed: 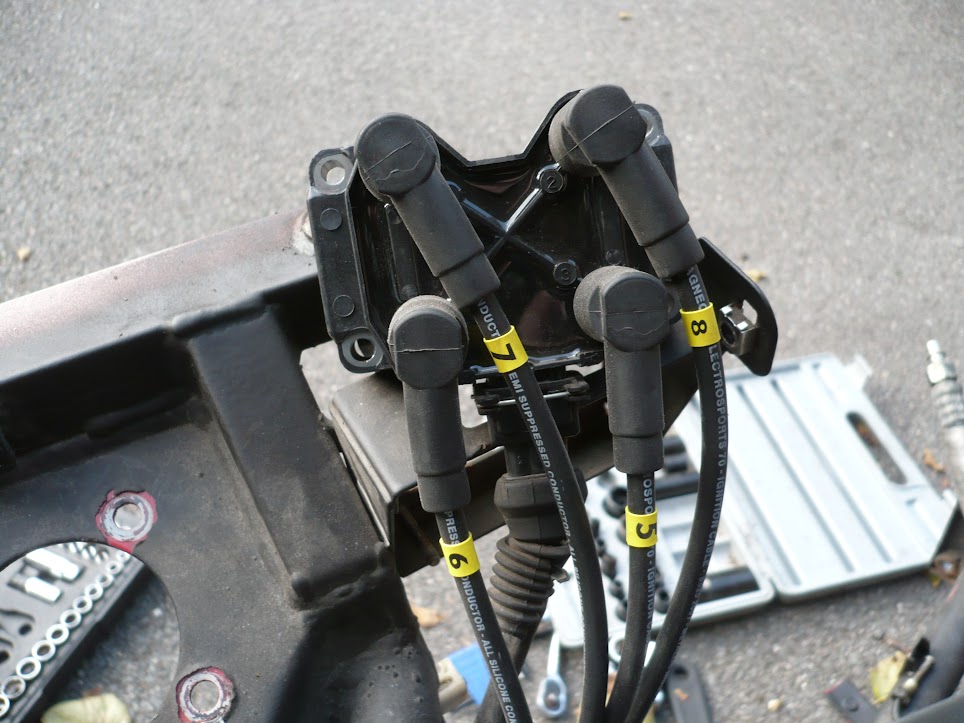 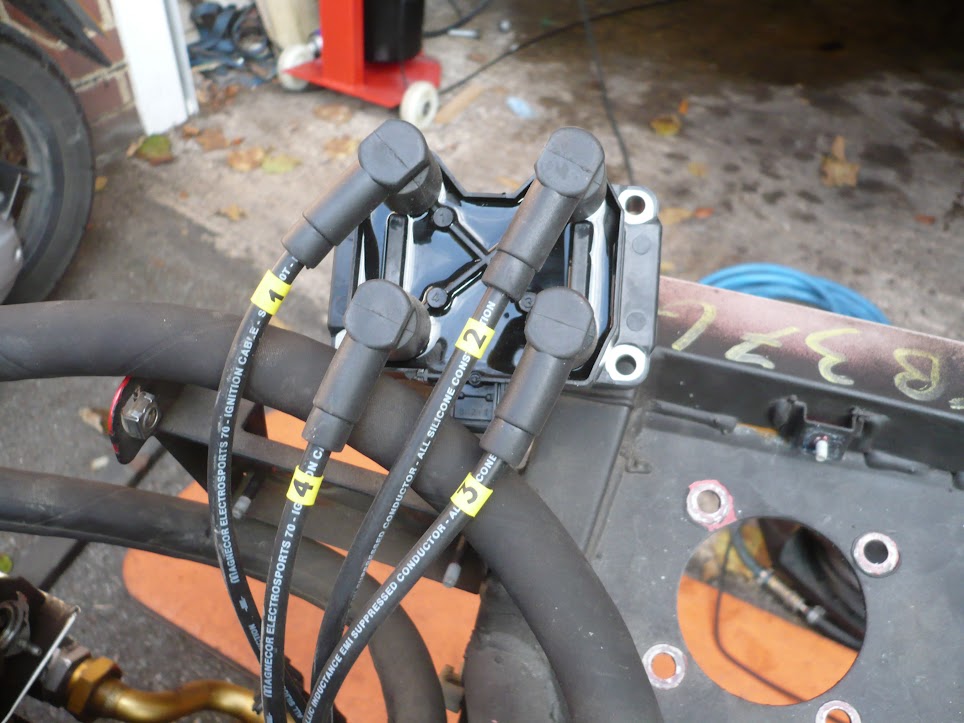 There are many places where the wiring loom is bolted to the engine subframe with P clips. Below are non-exhaustive examples: 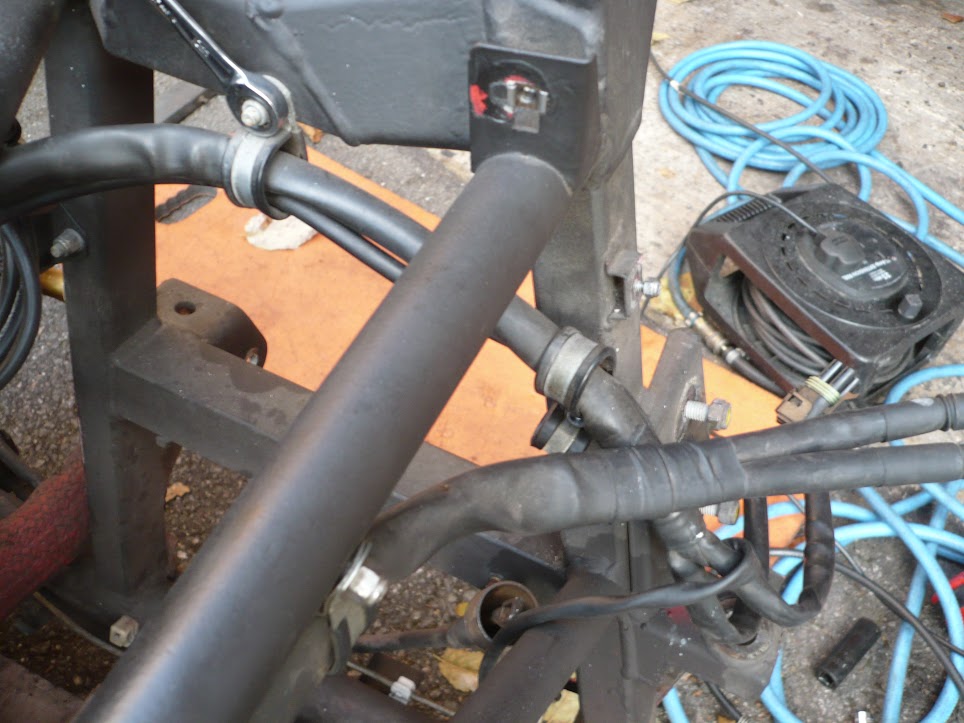 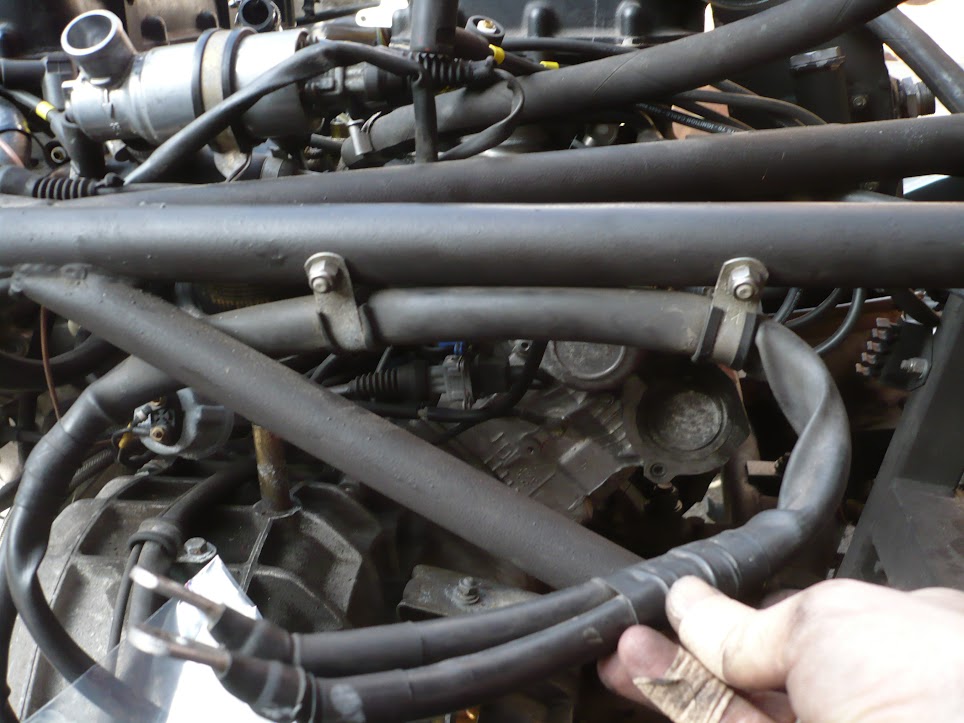 This is the auxiliary connector the other half of which was removed early on when the engine was still in the car: 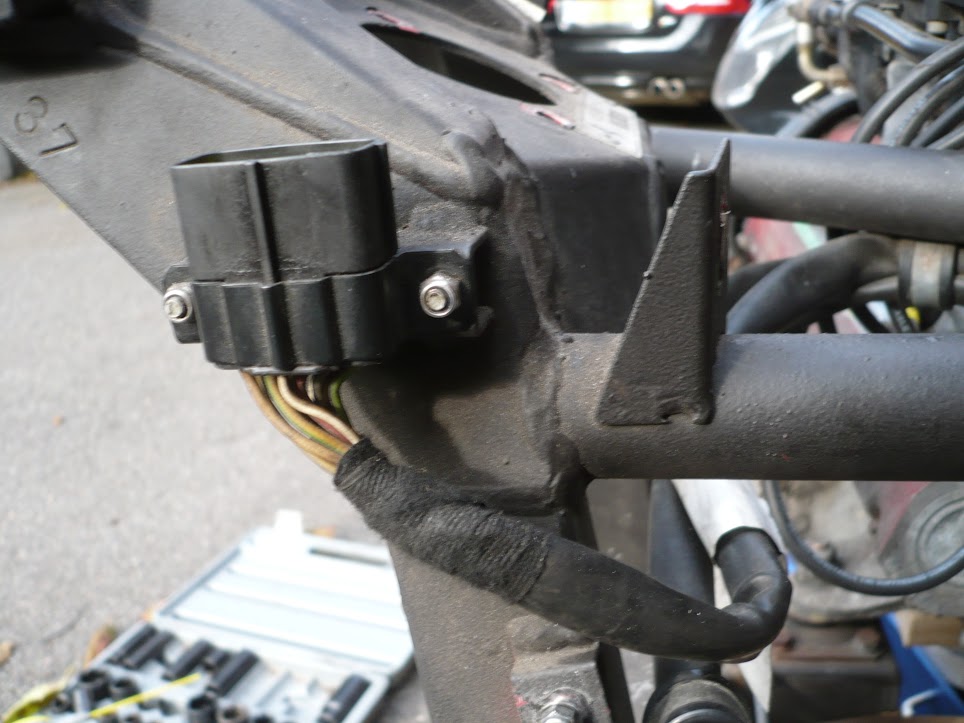 The rear chassis member has the handbrake cable mounted on it with P clips. These are very rusty here and indeed one of the studs broke when I tried to remove the nut so I had to add this to the list of repair jobs for later. It was just a case of grinding off and then welding on a new stud. The handbrake cable was functional but nasty so I decided I would replace it. 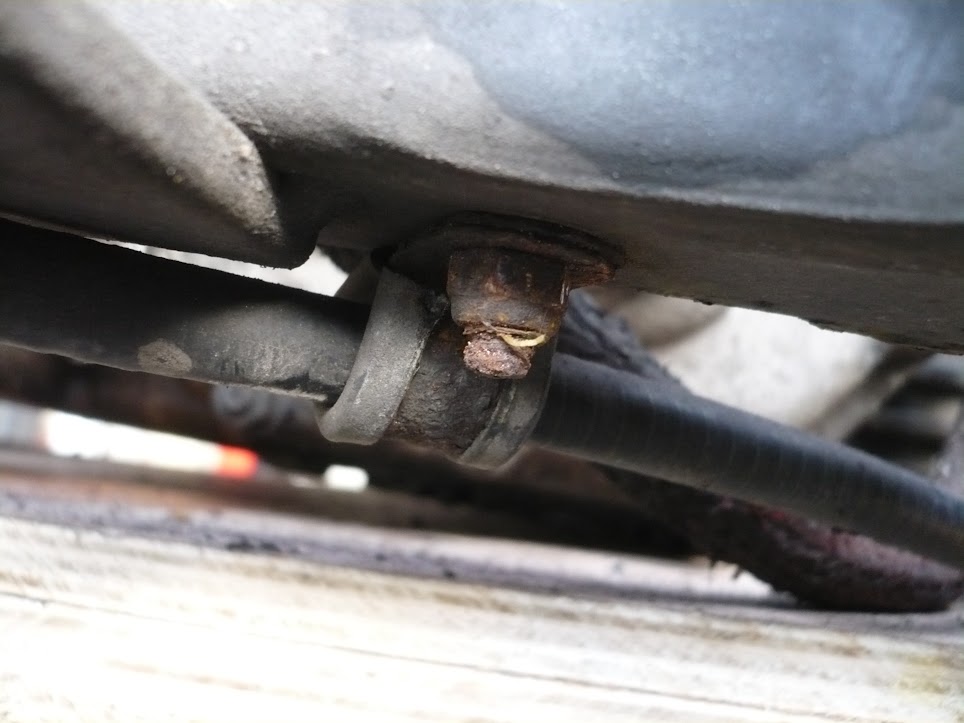 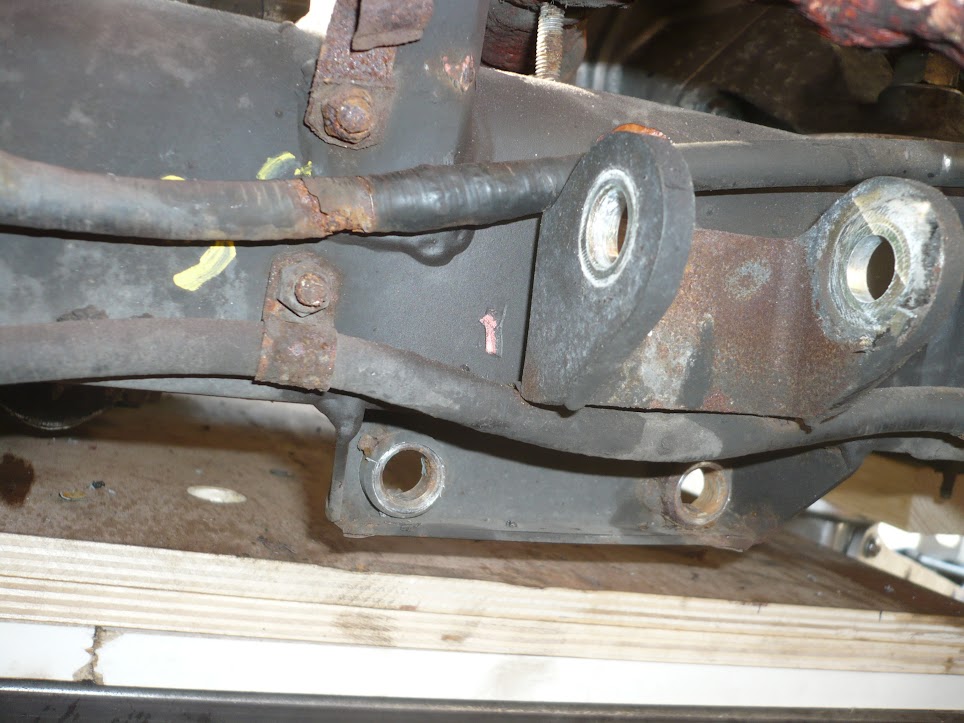 The idle air control valve is also mounted to the engine subframe so this needs to come off as well. The principal reason I took so many photos (and there are a lot I'm not showing you) is because I needed a reminder as to where everything would go on reassembly. 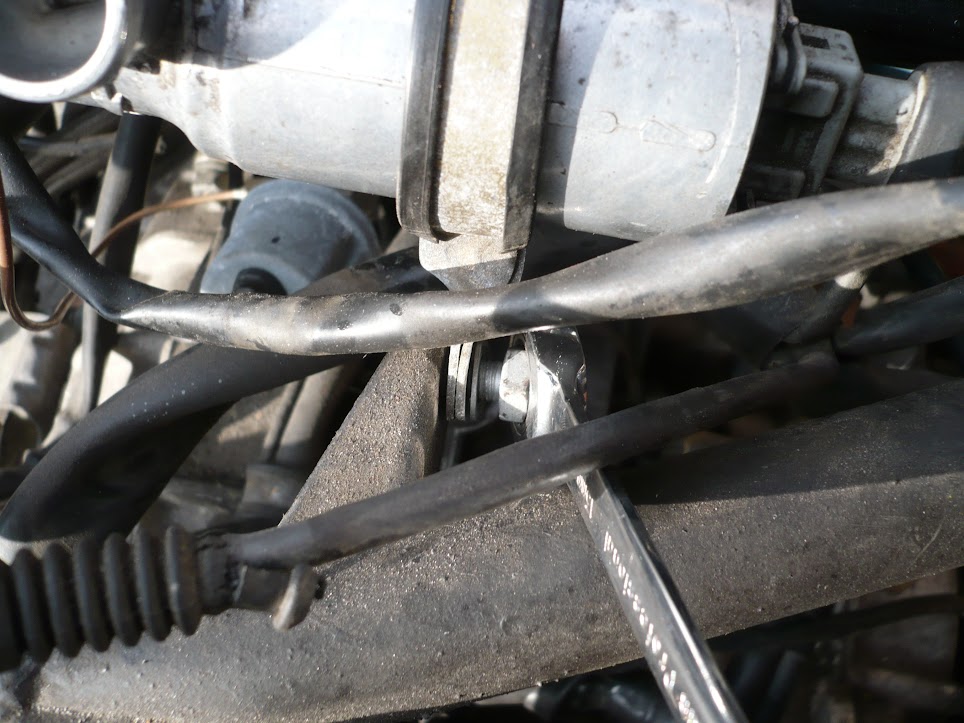 The oil tank was withdrawn from the engine. There are a couple of vent pipes to remove and the bottom connection (on the opposite side to that shown) was already removed from way back when the right hand manifold was removed: 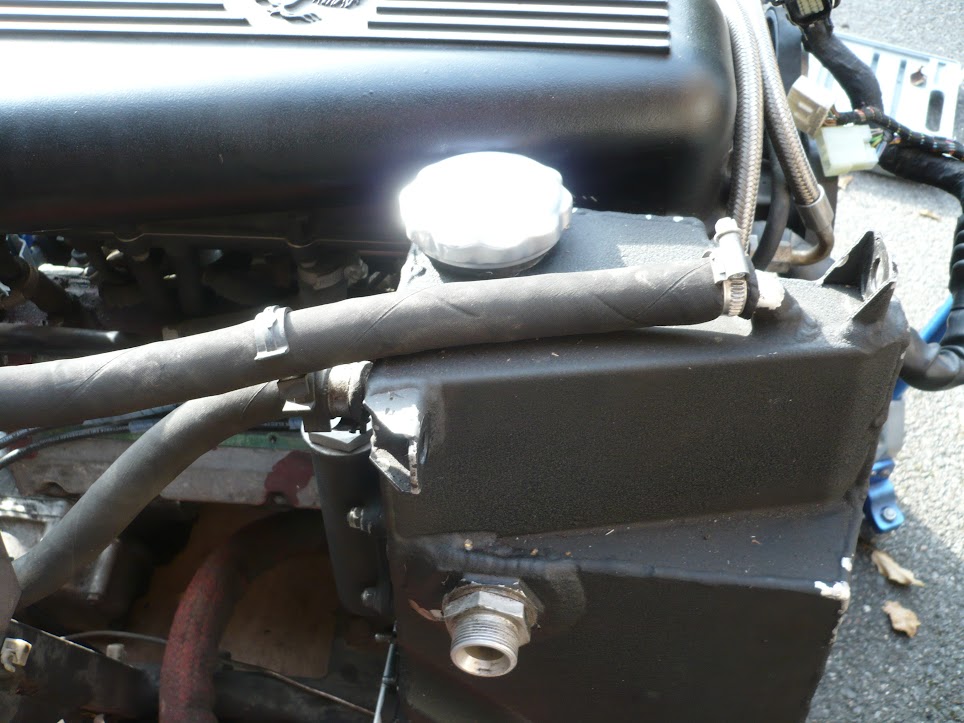 Once everything was disconnected, the engine mounts could be unfastened and this left the cradle loose and able to be removed. It was at this point, with the cradle already loose, that I found I still did not have enough clearance to get the front engine mounts past the gearbox (you have to  take the subframe off backwards i.e. pull it away from the rear of the engine. The mounts must pass below the gearbox, but the engine was still too close to the cradle so I had to jack it up further and put more blocks underneath it.

It's at this point that I was able to see how a better design for the engine dolly would look, should I ever do this again, but I suspect I never will. I may do another engine out service but it wouldn't involve removing the subframe from the engine.

After a certain amount of fiddling (and it isn't light either btw) you end up with this: 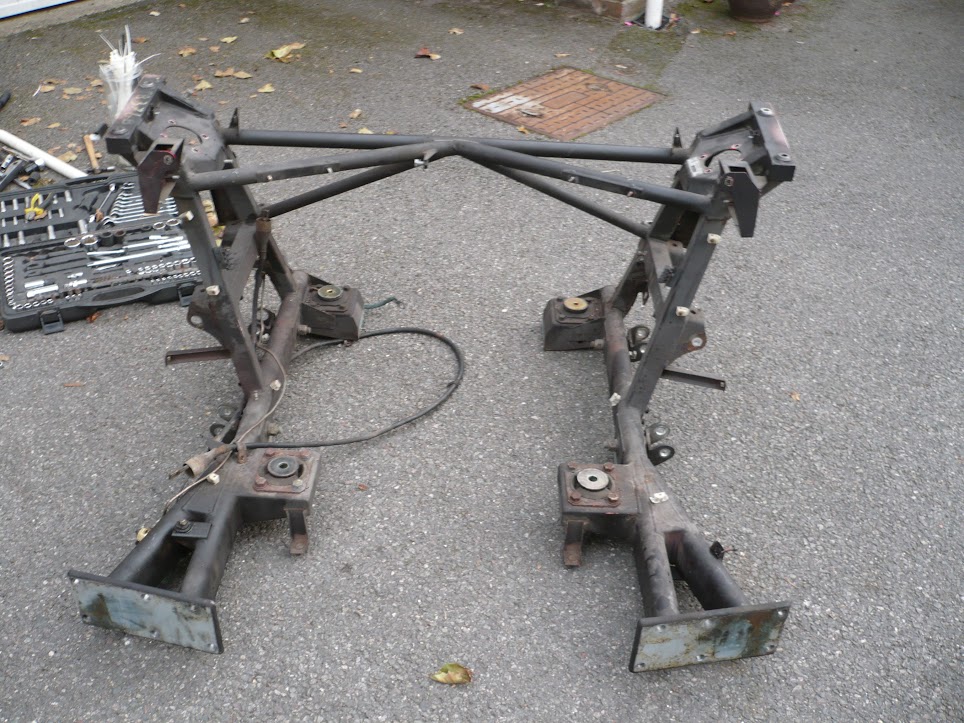 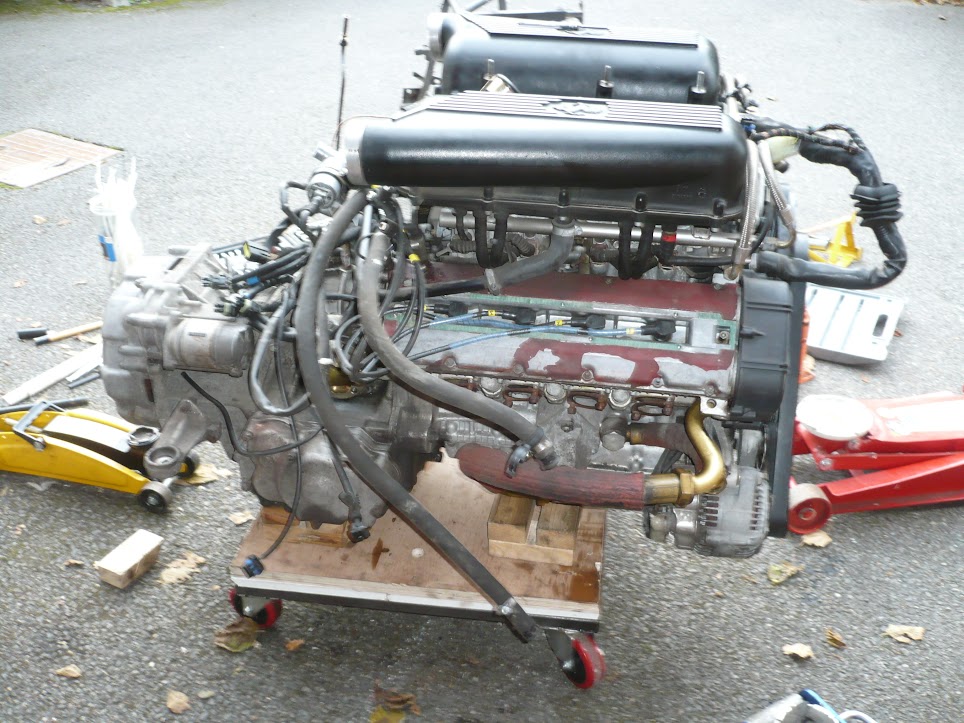 In this last photo you can see the blocks I had the engine on to get the frame out, and the two extra jacks I had to use to get it done. If lifting the engine like this you have to be careful to lift at a minimum of three points  if you lift from the centre at the front and back the engine is liable to tip over.

One more for posterity. Oh Lord what I have I done!!?? 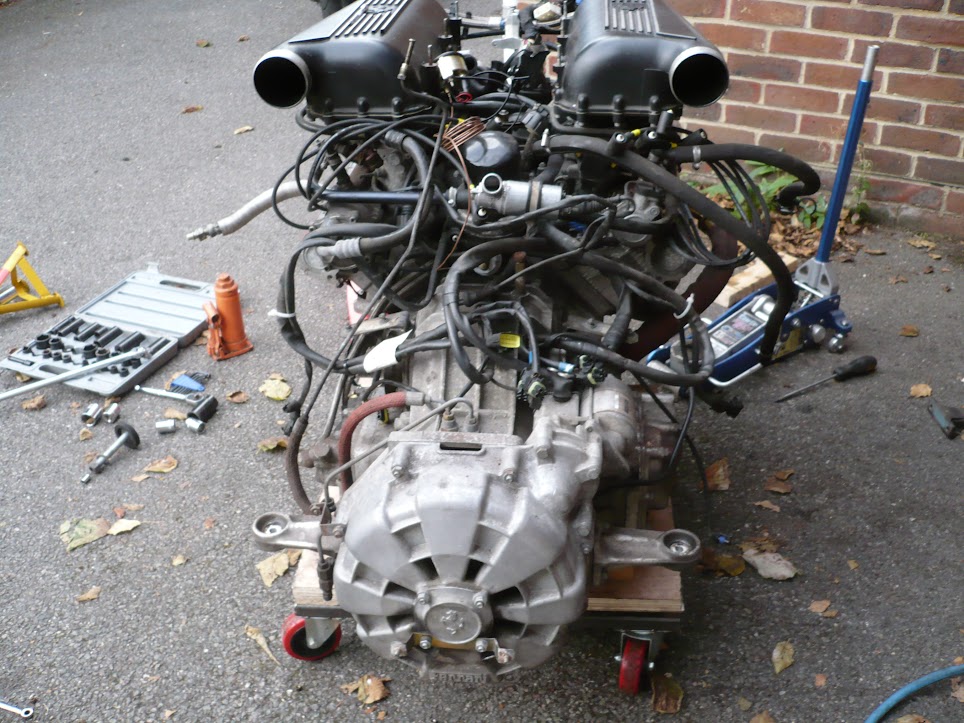